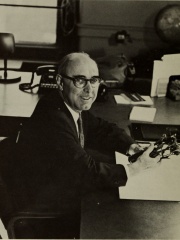 Edwin Harris "Ned" Colbert (September 28, 1905 – November 15, 2001) was a distinguished American vertebrate paleontologist and prolific researcher and author. Born in Clarinda, Iowa, he grew up in Maryville, Missouri and graduated from Maryville High School. His father was George H. Colbert who was head of the mathematics department at Northwest Missouri State University and had been at the college since its founding in 1906.He received his A.B. from the University of Nebraska, then his Masters and Ph.D. from Columbia University, finishing in 1935. Read more on Wikipedia

Among anthropologists, Edwin H. Colbert ranks 67 out of 69. Before him are Adolf Bernhard Meyer, Carleton S. Coon, Gayle Rubin, Napoleon Chagnon, Thomas Hylland Eriksen, and Grete Mostny. After him are Eugenie Scott and Alice Roberts.

Among ANTHROPOLOGISTS In United States