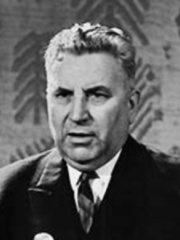 Edward Ochab (Polish: [ˈɛdvart ˈɔxap]; 16 August 1906 – 1 May 1989) was a Polish communist politician and top leader of Poland between March and October 1956. As a member of the Communist Party of Poland from 1929, he was repeatedly imprisoned for his activities under the Polish government of the time. In 1939 Ochab participated in the Defense of Warsaw but afterwards moved to the Soviet Union, where he became an early organizer and manager in the Union of Polish Patriots. Read more on Wikipedia

Among politicians, Edward Ochab ranks 9,761 out of 15,710. Before him are Agathe Uwilingiyimana, Nicolae Titulescu, Achilles Painter, Rædwald of East Anglia, Louis VII, Landgrave of Hesse-Darmstadt, and Roberto Micheletti. After him are Gnaeus Domitius Ahenobarbus, Ricardo Martinelli, Chuan Leekpai, Zeng Gong, Erishum I, and Moritz Leuenberger.