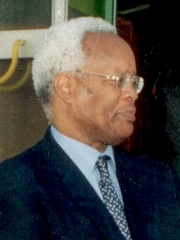 Edward Ngoyai Lowassa (born August 26, 1953) is a Tanzanian politician who was Prime Minister of Tanzania from 2005 to 2008, serving under President Jakaya Kikwete. Lowassa has gone into record as the first Prime Minister to have been forced to resign by a fraud scandal in the history of Tanzania. Following his resignation President Kikwete was obliged to dissolve his cabinet as required by the Constitution and with minimum delay, constituted a new one under a new Prime Minister, Mizengo Pinda.After the ruling CCM failed to select him as its candidate for the October 2015 presidential election, he left the party and stood instead as an opposition candidate. Read more on Wikipedia

Since 2007, the English Wikipedia page of Edward Lowassa has received more than 212,868 page views. His biography is available in 17 different languages on Wikipedia making him the 13,784th most popular politician.