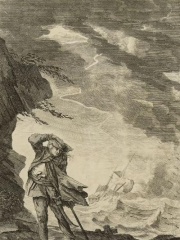 Edward "Ned" Low (also spelled Lowe or Loe; 1690–1724) was a notorious pirate of English origin during the latter days of the Golden Age of Piracy, in the early 18th century. Low was born into poverty in Westminster, London, and was a thief from an early age. He moved to Boston, Massachusetts, as a young man. Read more on Wikipedia

Since 2007, the English Wikipedia page of Edward Low has received more than 790,012 page views. His biography is available in 22 different languages on Wikipedia. Edward Low is the 23rd most popular pirate (down from 22nd in 2019), the 1,461st most popular biography from United Kingdom (down from 1,179th in 2019) and the 12th most popular British Pirate.

Among people born in 1690, Edward Low ranks 8. Before him are Christian Goldbach, Leonardo Vinci, Christian August, Prince of Anhalt-Zerbst, Ernst Johann von Biron, Francesco Maria Veracini, and Joseph Johann Adam, Prince of Liechtenstein. After him are Victor Amadeus I, Prince of Carignano, Nicolas Lancret, Patrona Halil, Peter Tordenskjold, Gottfried Heinrich Stölzel, and Kelemen Mikes. Among people deceased in 1724, Edward Low ranks 6. Before him are Pope Innocent XIII, Louis I of Spain, Gyeongjong of Joseon, Marie Jeanne Baptiste of Savoy-Nemours, and Johann Homann. After him are Bartolomeu de Gusmão, Marie of Lorraine, Benedetto Luti, Ernst Ludwig I, Duke of Saxe-Meiningen, Glückel of Hameln, and Ernest Frederick I, Duke of Saxe-Hildburghausen.