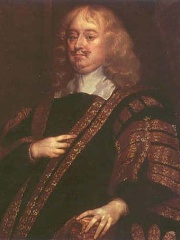 Edward Hyde, 1st Earl of Clarendon (18 February 1609 – 9 December 1674), was an English statesman, diplomat and historian, who served as chief advisor to Charles I during the First English Civil War, and Lord Chancellor to his son from 1660 to 1667. Unlike many contemporaries, Hyde largely avoided involvement in the political disputes of the 1630s, until elected to the Long Parliament in November 1640. Like many moderate Royalists, Hyde was a supporter of constitutional monarchy and the role of Parliament, but by 1642 felt its leaders were seeking too much power. Read more on Wikipedia

Since 2007, the English Wikipedia page of Edward Hyde, 1st Earl of Clarendon has received more than 260,356 page views. His biography is available in 18 different languages on Wikipedia making him the 10,185th most popular politician.

Among politicians, Edward Hyde, 1st Earl of Clarendon ranks 10,134 out of 14,801. Before him are Sadeq Khan Zand, Karl, Duke of Schleswig-Holstein-Sonderburg-Glücksburg, Ahti Karjalainen, Lucius Aemilius Lepidus Paullus, Gisulf II of Friuli, and Caspar Weinberger. After him are Roger Williams, Jamshid bin Abdullah of Zanzibar, Şemsettin Günaltay, Tribhuvan of Nepal, Pacorus I, and Kevin Rudd.