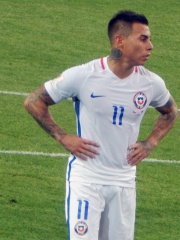 Eduardo Jesús Vargas Rojas (Spanish pronunciation: [eˈðwaɾðo ˈβaɾɣas]; born 20 November 1989) is a Chilean professional footballer who plays as a forward for Liga MX club Tigres UANL and the Chile national team. Emerging as a top talent at Cobreloa, Vargas moved to Universidad de Chile where he won three titles, including the 2011 Copa Sudamericana, where he was named player of the tournament. In 2011, he was co-awarded the Chilean Footballer of the Year and also finished as runner-up for the South American Footballer of the Year. Read more on Wikipedia

Since 2007, the English Wikipedia page of Eduardo Vargas has received more than 1,453,674 page views. His biography is available in 45 different languages on Wikipedia making him the 1,982nd most popular soccer player.