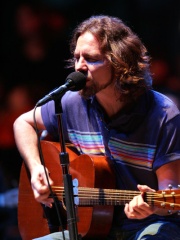 Eddie Jerome Vedder (born Edward Louis Severson III; December 23, 1964) is an American singer, musician, and songwriter best known as the lead vocalist and one of four guitarists of the rock band Pearl Jam. He also appeared as a guest vocalist in Temple of the Dog, the one-off tribute band dedicated to the late singer Andrew Wood. Vedder is known for his powerful baritone vocals. Read more on Wikipedia

Among musicians, Eddie Vedder ranks 567 out of 2,662. Before him are Peter Schreier, Toquinho, Christoph Schneider, Murray Perahia, Andy Fletcher, and Dee Dee Warwick. After him are Dido, Maria Yudina, David A. Stewart, Chad Smith, Lev Oborin, and Tico Torres.