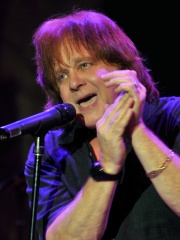 Edward Joseph Mahoney (March 21, 1949 – September 13, 2019), known professionally as Eddie Money, was an American singer and songwriter who, in the 1970s and 1980s, had eleven Top 40 songs, including "Baby Hold On", "Two Tickets to Paradise", "Think I'm in Love", "Shakin'", "Take Me Home Tonight", "I Wanna Go Back", "Walk on Water", and "The Love in Your Eyes". Critic Neil Genzlinger of The New York Times called him a working-class rocker and Kristin Hall of the Associated Press stated he had a husky voice. Read more on Wikipedia

Among singers, Eddie Money ranks 1,618 out of 3,541. Before him are Mildred Bailey, Teresa Brewer, Jacek Kaczmarski, Sunmi, Nelson Eddy, and Jan Peerce. After him are Irma Thomas, Raekwon, Joey Belladonna, Billy Fury, Tones and I, and Ol' Dirty Bastard.