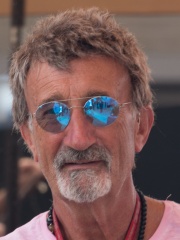 Edmund Patrick Jordan, OBE (born 30 March 1948), also known as EJ, is an Irish former motorsport team boss, businessman and television personality. Born in Dublin, Jordan worked first at the Bank of Ireland. He won the Irish Kart Championship in 1971 and moved to Formula Ford in 1974. Read more on Wikipedia

Since 2007, the English Wikipedia page of Eddie Jordan has received more than 1,014,673 page views. His biography is available in 28 different languages on Wikipedia making him the 246th most popular businessperson.