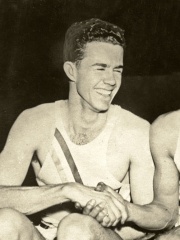 Earle Elmer Meadows (June 29, 1913 – November 11, 1992) was an American pole vaulter who won a gold medal at the 1936 Olympics. His winning vault is featured in Leni Riefenstahl's film Olympia. Meadows had a long rivalry with Bill Sefton, his teammate from the University of Southern California. Read more on Wikipedia

Since 2007, the English Wikipedia page of Earle Meadows has received more than 18,205 page views. Her biography is available in 16 different languages on Wikipedia making her the 410th most popular athlete.