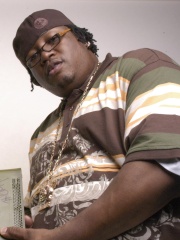 Earl Stevens (born November 15, 1967), better known by his stage name E-40, is an American rapper, songwriter and actor. He is a founding member of the rap group The Click, and the founder of Sick Wid It Records. He has released twenty-eight studio albums to date, appeared on numerous movie soundtracks, and has also done guest appearances on a host of other rap albums. Read more on Wikipedia

Since 2007, the English Wikipedia page of E-40 has received more than 2,168,902 page views. His biography is available in 21 different languages on Wikipedia making him the 2,444th most popular singer.

Page views of E-40s by language

Among singers, E-40 ranks 2,458 out of 3,001. Before him are Kejsi Tola, Mayu Watanabe, Lacey Sturm, Pitty, Ai Takahashi, and Masha Katz. After him are Sasha Song, Example, Too Short, Guy Sebastian, Marta Roure, and Nam Woo-hyun.