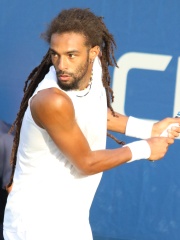 Dustin Brown (born 8 December 1984) is a Jamaican-German professional tennis player. He rose to fame after beating Rafael Nadal in the 2014 Halle Open and Wimbledon 2015, and is known for his technique, speed, and entertaining playing style, often entertaining the crowd with trick shots. Brown competes mainly on the ATP Challenger Tour, in singles and doubles, having won 24 overall titles. Read more on Wikipedia

Since 2007, the English Wikipedia page of Dustin Brown has received more than 260,326 page views. His biography is available in 21 different languages on Wikipedia making him the 269th most popular tennis player.