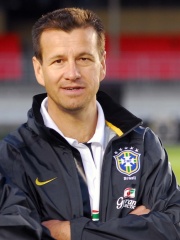 Carlos Caetano Bledorn Verri (born October 31, 1963 in Ijuí, Rio Grande do Sul), commonly known as Dunga (Brazilian Portuguese: [ˈdũɡɐ]), is a Brazilian football manager and former professional footballer who played as a defensive midfielder. Under his captaincy, Brazil won the 1994 FIFA World Cup and he lifted the World Cup trophy. Along with Xavi, he is one of only two men to have played in a World Cup final, an Olympic final, a Confederations Cup final and a continental championship final. Read more on Wikipedia

Since 2007, the English Wikipedia page of Dunga has received more than 742,492 page views. His biography is available in 57 different languages on Wikipedia making him the 236th most popular soccer player.

Page views of Dungas by language