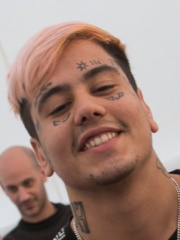 Mauro Ezequiel Lombardo Quiroga (born 24 June 1996), better known by his stage name Duki (stilyzed as DUKI), is an Argentine rapper and singer. He is the lead voice of trap music in Argentina, thanks to his multiple hits with his singles and his particular style of voice and staging. Duki began to gain recognition for his appearances in rap battles, such as "El Quinto Escalón", which was one of the most important in Argentina, and where he obtained his first share of popularity when he won it in 2016. Read more on Wikipedia

Since 2007, the English Wikipedia page of Duki has received more than 90,578 page views. His biography is available in 26 different languages on Wikipedia. Duki is the 3,287th most popular singer, the 861st most popular biography from Argentina and the 17th most popular Argentinean Singer.

Page views of Dukis by language

Among singers, Duki ranks 3,287 out of 3,541. Before him are Ester Dean, Chieko Ochi, Gianluca Bezzina, Aesop Rock, Sukhwinder Singh, and Anna Abreu. After him are Trick-Trick, Action Bronson, Mystikal, Kratae R-Siam, Jennifer Nettles, and Megan Burns.

Among SINGERS In Argentina