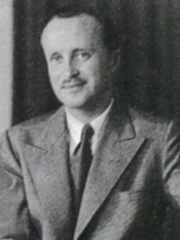 Dom Duarte Nuno, Duke of Braganza (23 September 1907 – 24 December 1976) was the claimant to the defunct Portuguese throne, as both the Miguelist successor of his father, Miguel, Duke of Braganza, and later as the head of the only Brigantine house, after the death of the last Legitimist Braganza, King Manuel II of Portugal. In 1952, when the Portuguese Laws of Banishment were repealed, the Duke moved his family to Portugal, thus returning the Miguelist Braganzas to their homeland and becoming the first of the former Portuguese royal dynasty to live in Portugal since the abolition of the monarchy, in 1910.Once established in Portugal, the Duke was granted a pension and residence by the Fundação da Casa de Bragança, the organization has owned and managed all the private assets of the House of Braganza, since the death of King Manuel II, in 1932. Read more on Wikipedia

Page views of Duarte Nuno, Duke of Braganzas by language

Among politicians, Duarte Nuno, Duke of Braganza ranks 6,071 out of 15,710. Before him are Julia the Younger, Jizi, Agis I, Theodoric I, Margrave of Meissen, Diana Abgar, and Tiberius Julius Alexander. After him are Godfrey III, Duke of Lower Lorraine, Princess Victoria of Saxe-Coburg and Gotha, Infanta María Teresa of Spain, William I, Count of Burgundy, Jerzy Buzek, and Sophie Blanchard.