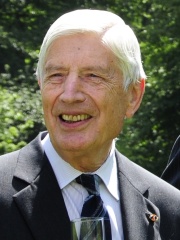 Andreas Antonius Maria "Dries" van Agt (Dutch: [ˈdris fɑn ˈɑxt] (listen); born 2 February 1931) is a retired Dutch politician and diplomat of the defunct Catholic People's Party (KVP) and later the Christian Democratic Appeal (CDA) party and jurist who served as Prime Minister of the Netherlands from 19 December 1977 until 4 November 1982. Van Agt studied Law at the Radboud University Nijmegen obtaining a Master of Laws degree and worked as a criminal defense lawyer in Eindhoven from September 1955 until December 1957 and as a civil servant at the Ministries of Agriculture and Fisheries and Justice from December 1957 until January 1968. Van Agt worked as a professor of Criminal law and Criminal procedure at his alma mater from January 1968 until July 1971 and served as a judge at the district court of Arnhem from April 1970 until May 1971. Read more on Wikipedia

Since 2007, the English Wikipedia page of Dries van Agt has received more than 125,823 page views. His biography is available in 35 different languages on Wikipedia making him the 6,933rd most popular politician.