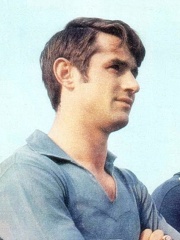 Dragan Holcer (19 January 1945 – 23 September 2015) was a Yugoslav association football defender.Holcer was born in captivity in a Nazi prison camp to Slovenian father Franc Holcer and Italian-Austrian mother Ida Orelli who lived in Niš. His father fought in World War II as part of Yugoslav Partisans. His father was killed in battle while his pregnant mother was rounded up in Slovenia and imprisoned in Nazi Germany along with her three daughters. Read more on Wikipedia

Since 2007, the English Wikipedia page of Dragan Holcer has received more than 29,169 page views. His biography is available in 17 different languages on Wikipedia making him the 1,110th most popular soccer player.