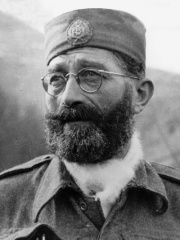 Dragoljub "Draža" Mihailović (Serbian Cyrillic: Драгољуб Дража Михаиловић; 27 April 1893 – 17 July 1946) was a Yugoslav Serb general during World War II. A staunch royalist, he retreated to the mountains near Belgrade when the Germans overran Yugoslavia in April 1941 and there he organized bands of guerrillas known as the Chetnik Detachments of the Yugoslav Army. The organisation is commonly known as the Chetniks, although the name of the organisation was later changed to the Yugoslav Army in the Fatherland (JVUO, ЈВУО). Founded as the first Yugoslav resistance movement, it was royalist and nationalist, as opposed to the other, Josip Broz Tito's Partisans who were communist. Read more on Wikipedia

Since 2007, the English Wikipedia page of Draža Mihailović has received more than 453,745 page views. His biography is available in 31 different languages on Wikipedia making him the 149th most popular military personnel.

Among MILITARY PERSONNELS In Serbia