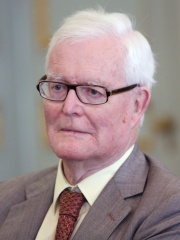 Douglas Richard Hurd, Baron Hurd of Westwell, (born 8 March 1930) is a British Conservative Party politician who served in the governments of Margaret Thatcher and John Major from 1979 to 1995.A career diplomat and political secretary to Prime Minister Edward Heath, Hurd first entered Parliament in February 1974 as MP for the Mid Oxfordshire constituency (Witney from 1983). His first government post was as Minister for Europe from 1979 to 1983 (being that office's inaugural holder) and he served in several Cabinet roles from 1984 onwards, including Secretary of State for Northern Ireland (1984–85), Home Secretary (1985–89) and Foreign Secretary (1989–95). He stood unsuccessfully for the Conservative Party leadership in 1990, and retired from frontline politics during a Cabinet reshuffle in 1995.In 1997, Hurd was elevated to the House of Lords and is one of the Conservative Party's most senior elder statesmen. Read more on Wikipedia