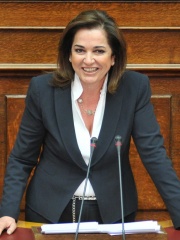 Theodora "Dora" Bakoyanni (Greek: Θεοδώρα "Ντόρα" Μπακογιάννη; pronounced [ˈdoɾa bakoˈʝani]; née Mitsotakis; Greek: Μητσοτάκη; born May 6, 1954) is a Greek politician. From 2006 to 2009 she was Minister of Foreign Affairs of Greece, the highest position ever to have been held by a woman in the Cabinet of Greece at the time; she was also Chairperson-in-Office of the Organization for Security and Co-operation in Europe in 2009. Previously she was the Mayor of Athens from 2003 to 2006, the first female mayor in the city's history, and the first woman to serve as mayor of a city hosting the Olympic Games. Read more on Wikipedia