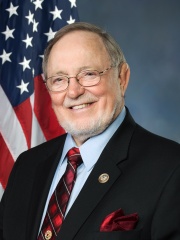 Edwin Donald Young (born June 9, 1933) is an American politician serving as the U.S. Representative for Alaska's at-large congressional district since 1973. He is the Republican Party's longest-serving member of the U.S. House of Representatives in history, having represented Alaska for 24 terms. Young is the longest currently serving member of Congress, as well as the last remaining member who has been in office since the Nixon Administration; he became the 45th Dean of the House of Representatives on December 5, 2017, after the resignation of John Conyers from Michigan. Read more on Wikipedia

Since 2007, the English Wikipedia page of Don Young has received more than 732,745 page views. His biography is available in 14 different languages on Wikipedia making him the 13,643rd most popular politician.

Among people born in 1933, Don Young ranks 325. Before him are Glenn Corbett, Bobby Helms, Craig L. Thomas, David McCullough, Bob Bennett, and Bill Hayden. After him are Wendell R. Anderson and Buddy MacKay.