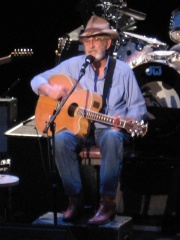 Donald Ray Williams (May 27, 1939 – September 8, 2017) was an American country singer, songwriter, and 2010 inductee to the Country Music Hall of Fame. He began his solo career in 1971, singing popular ballads and amassing 17 number one country hits. His straightforward yet smooth bass-baritone voice, soft tones, and imposing build earned him the nickname: "Gentle Giant" of country music.Williams has had a strong influence over a variety of recording artists of different genres. Read more on Wikipedia

Since 2007, the English Wikipedia page of Don Williams has received more than 1,904,686 page views. His biography is available in 19 different languages on Wikipedia making him the 1,416th most popular musician.