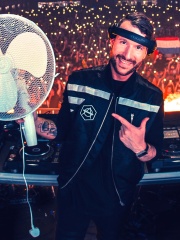 Don Pepijn Schipper (Dutch pronunciation: [ˈdɔn pɛˈpɛin ˈsxɪpər]; born 27 February 1980), better known by his stage name Don Diablo, is a Dutch DJ, record producer, musician and songwriter of electronic dance music from Coevorden. He is known for his electronic style of production and vocalizing in most of his songs. He is one of the pioneers of the future house genre and was ranked sixth in the Top 100 DJs – 2020 list by DJ Mag. Read more on Wikipedia

Since 2007, the English Wikipedia page of Don Diablo has received more than 682,825 page views. His biography is available in 22 different languages on Wikipedia (up from 20 in 2019). Don Diablo is the 1,826th most popular musician (down from 1,490th in 2019), the 759th most popular biography from Netherlands and the 22nd most popular Dutch Musician.

Among MUSICIANS In Netherlands