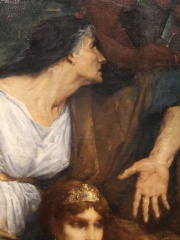 Domitia Lepida (c. 5 BC – AD 54) was a Roman aristocrat, related to the imperial family. She was mother of Valeria Messalina, wife of the Emperor Claudius. Read more on Wikipedia

Domitia Lepida the Younger was a Roman noblewoman who was the daughter of the Emperor Marcus Aurelius. She was most famous for her marriage to Lucius Verus, who was co-emperor with Marcus Aurelius.

Page views of Domitia Lepida the Youngers by language

Among politicians, Domitia Lepida the Younger ranks 3,662 out of 15,710. Before her are Rafael Correa, Simeon of Moscow, Hsekiu, Huo Qubing, Princess Anna Sophie of Denmark, and Jules Ferry. After her are Phraates IV, Al-Mu'izz li-Din Allah, Muhammad al-Nasir, Fouad Mebazaa, Bayinnaung, and Emperor Seimu.