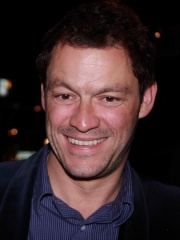 Dominic Gerard Francis Eagleton West (born 15 October 1969) is an English actor, director, and musician. He is best known for playing Jimmy McNulty in The Wire (2002–2008) and Noah Solloway in The Affair (2014–2019), the latter of which earned him a Golden Globe nomination. He won the British Academy Television Award for Best Actor at the 2012 British Academy Television Awards for portraying serial killer Fred West in Appropriate Adult (2011), and he played Jean Valjean in the 2018 BBC miniseries Les Misérables. Read more on Wikipedia

Since 2007, the English Wikipedia page of Dominic West has received more than 6,227,717 page views. His biography is available in 34 different languages on Wikipedia making him the 3,168th most popular actor.