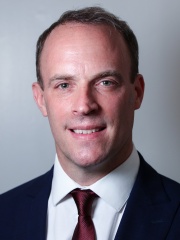 Dominic Rennie Raab (born 25 February 1974) is a British politician serving as First Secretary of State and Foreign Secretary since July 2019. A member of the Conservative Party, he has also been the Member of Parliament (MP) for Esher and Walton since 2010. Raab was born in Buckinghamshire and attended Dr Challoner's Grammar School before studying law at Lady Margaret Hall, Oxford and Jesus College, Cambridge. Read more on Wikipedia

Among politicians, Dominic Raab ranks 13,864 out of 15,710. Before her are Arnaud Montebourg, Manasseh Sogavare, John Adams Dix, Iñaki Azkuna, I. I. Chundrigar, and Ted Stevens. After her are Payne Stewart, Khentkaus II, Philipp Rösler, Elliot Richardson, Jorge Quiroga, and Alberto Núñez Feijóo.