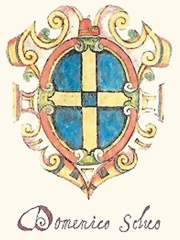 Domenico Selvo (died 1087) was the 31st Doge of Venice, serving from 1071 to 1084. During his reign as Doge, his domestic policies, the alliances that he forged, and the battles that the Venetian military won and lost laid the foundations for much of the subsequent foreign and domestic policy of the Republic of Venice. He avoided confrontations with the Byzantine Empire, the Holy Roman Empire, and the Roman Catholic Church at a time in European history when conflict threatened to upset the balance of power. Read more on Wikipedia

Among politicians, Domenico Selvo ranks 8,921 out of 15,710. Before him are Glaucias of Taulantii, Alan IV, Duke of Brittany, William Petty, 2nd Earl of Shelburne, Maria Dobroniega of Kiev, Patrick Henry, and He Long. After him are Eleanor of Naples, Duchess of Ferrara, Paolo Renier, Giovanni Spadolini, Jalal-ud-din Khalji, Guido de Marco, and Artúr Görgei.

Among people born in 1100, Domenico Selvo ranks 62. Before him are Petrus Comestor, Herman of Carinthia, Gregory Pakourianos, Shawar, Tatikios, and Leo I, Prince of Armenia. After him are Mihailo Vojislavljević, John Xiphilinus, Vitale Faliero, Dagobert of Pisa, Nikephoros Bryennios the Elder, and Dirk IV, Count of Holland. Among people deceased in 1087, Domenico Selvo ranks 10. Before him are Abū Ishāq Ibrāhīm al-Zarqālī, Blot-Sweyn, Bertha of Savoy, Constantine the African, William I, Count of Burgundy, and Maria Dobroniega of Kiev. After him is Eustace II, Count of Boulogne.