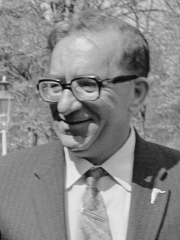 Dominic Mintoff, (Maltese: Duminku Mintoff; often called il-Perit, "the Architect"; 6 August 1916 – 20 August 2012) was a Maltese Socialist politician, architect, anti-colonialist revolutionary, and civil engineer who was leader of the Labour Party from 1949 to 1984, and was 8th Prime Minister of Malta from 1955 to 1958, when Malta was still a British colony, and again, following independence, from 1971 to 1984. Read more on Wikipedia

Since 2007, the English Wikipedia page of Dom Mintoff has received more than 177,283 page views. His biography is available in 30 different languages on Wikipedia making him the 9,758th most popular politician.

Among politicians, Dom Mintoff ranks 9,710 out of 14,801. Before him are Kálmán Tisza, León Febres Cordero, Edmund of Scotland, Nicolas Grunitzky, John Frederick, Margrave of Brandenburg-Ansbach, and Gogugwon of Goguryeo. After him are Hugo Preuß, Badi' al-Zaman Mirza, Ida of Formbach-Ratelnberg, Matti Vanhanen, W. Averell Harriman, and Marcus Valerius Messalla Rufus.

Others born in Malta

Among POLITICIANS In Malta