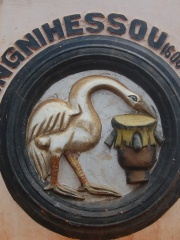 Do-Aklin or Gangnihessou (Ganye Hessou) or Dogbari is claimed as the founder of the Fon Kingdom of Dahomey in present-day Benin and the first person in the royal lineage of the Kings of Dahomey (the Aladaxonou dynasty). In many versions he is considered the first king of Dahomey even though the kingdom was founded after his death. Very little is known about Do-Aklin and most of it is connected to folklore, but it is generally claimed that he settled a large group of Aja people from Allada on the Abomey plateau amongst the local inhabitants in c. Read more on Wikipedia

Page views of Do-Aklins by language

Among politicians, Do-Aklin ranks 4,378 out of 15,710. Before him are Boso of Provence, Inge I of Norway, Wu Ding, Markos Vafeiadis, Osorkon I, and Yisrael Kristal. After him are Deioces, Steve Bannon, Constance of Antioch, Stefan Uroš I, Wazner, and Charlotte Marguerite de Montmorency.