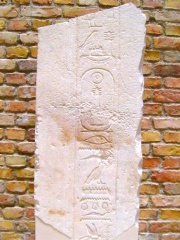 Djedkare Isesi (known in Greek as Tancheres) was a pharaoh, the eighth and penultimate ruler of the Fifth Dynasty of Egypt in the late 25th century to mid-24th century BC, during the Old Kingdom. Djedkare succeeded Menkauhor Kaiu and was in turn succeeded by Unas. Read more on Wikipedia

Djedkare isesi is most famous for being the first pharaoh to rule over a united Egypt, and for constructing the first pyramid in the Old Kingdom.

Among politicians, Djedkare Isesi ranks 3,414 out of 15,710. Before him are Princess Maria Josepha of Saxony, Princess Marianne of the Netherlands, Chivu Stoica, Kilij Arslan II, Milonia Caesonia, and Alfonso II of Asturias. After him are Osvaldo Dorticós Torrado, Magnus III of Sweden, Hugh of Italy, Thomas Bach, Yasuhiro Nakasone, and Raúl Alfonsín.