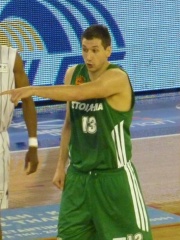 Dimitris Diamantidis (Greek: Δημήτρης Διαμαντίδης Greek pronunciation: [ðiˈmi.tɾis ðʝa.maˈdi.ðis]; born May 6, 1980) is a retired Greek professional basketball player, who spent the last twelve seasons of his EuroLeague career with Panathinaikos, where he last served as the team's general manager. Widely regarded as one of the greatest European players ever to grace the game, he marked his era by being the most versatile player in the EuroLeague, serving as an inspiration to a whole generation of young European stars. He is the only player to have earned all four aforementioned EuroLeague end-of-season distinctions, even more so in a single year. Read more on Wikipedia

Among BASKETBALL PLAYERS In Greece