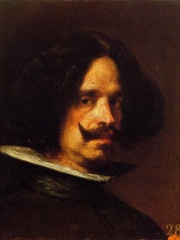 Diego Rodríguez de Silva y Velázquez (baptized June 6, 1599 – August 6, 1660) was a Spanish painter, the leading artist in the court of King Philip IV and of the Spanish Golden Age. He was an individualistic artist of the contemporary Baroque period. He began to paint in a precise tenebrist style, later developing a freer manner characterized by bold brushwork. Read more on Wikipedia

Since 2007, the English Wikipedia page of Diego Velázquez has received more than 1,887,657 page views. His biography is available in 132 different languages on Wikipedia making him the 17th most popular painter.

Among painters, Diego Velázquez ranks 17 out of 1,258. Before him are Caravaggio, Francisco Goya, Edvard Munch, Johannes Vermeer, Sandro Botticelli, and Paul Gauguin. After him are Paul Cézanne, Henri Matisse, Titian, Gustav Klimt, Donatello, and Pieter Bruegel the Elder.