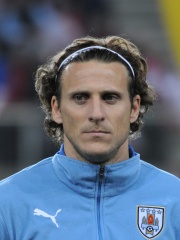 Diego Forlán Corazo (Spanish pronunciation: [ˈdjeɣo foɾˈlan]; born 19 May 1979) is a Uruguayan professional football manager and former player who played as a forward. He is the manager of Peñarol. At club level, Forlán is a two-time winner of both the Pichichi Trophy and the European Golden Shoe. Read more on Wikipedia

Since 2007, the English Wikipedia page of Diego Forlán has received more than 2,936,486 page views. His biography is available in 75 different languages on Wikipedia making him the 268th most popular soccer player.