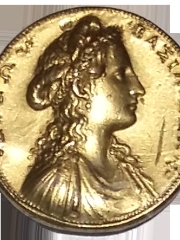 Dido ( DY-doh; Ancient Greek: Διδώ Greek pronunciation: [diː.dɔ̌ː], Latin pronunciation: [ˈdiːdoː]), also known as Alyssa or Elissa ( ə-LISS-ə, Ἔλισσα), was the legendary foundress and first queen of the Phoenician city-state of Carthage, located in modern Tunisia. Known only through ancient Greek and Roman sources, most of which were written well after Carthage's founding, her historicity remains uncertain. Read more on Wikipedia

Since 2007, the English Wikipedia page of Dido has received more than 1,501,693 page views. Her biography is available in 46 different languages on Wikipedia. Dido is the 361st most popular politician (down from 317th in 2019), the 2nd most popular biography from Lebanon (up from 4th in 2019) and the most popular Lebanese Politician.

Dido was a queen of Carthage and is most famous for the story of her suicide after the death of her lover, Aeneas.

Page views of Didos by language

Among politicians, Dido ranks 361 out of 15,710. Before her are Erich Honecker, Helmut Kohl, Park Chung-hee, Philip III of Spain, Francis II, Holy Roman Emperor, and Horemheb. After her are Gustaf VI Adolf of Sweden, Abdulmejid I, Abbas the Great, Sargon of Akkad, Joachim Murat, and Ertuğrul.

Others Deceased in 759 BC