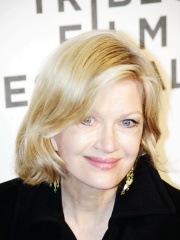 Lila Diane Sawyer (; born December 22, 1945) is an American television broadcast journalist known for anchoring major programs on two networks including ABC World News Tonight, Good Morning America, 20/20, and Primetime newsmagazine while at ABC News. During her tenure at CBS News she hosted CBS Morning and was the first woman correspondent on 60 Minutes. Prior to her journalism career, she was a member of U.S. President Richard Nixon's White House staff and assisted in his post-presidency memoirs. Read more on Wikipedia

Since 2007, the English Wikipedia page of Diane Sawyer has received more than 2,147,006 page views. Her biography is available in 23 different languages on Wikipedia making her the 66th most popular journalist.

Among journalists, Diane Sawyer ranks 67 out of 100. Before her are Dan Rather, Martin Parr, Vladislav Listyev, Chris Bonington, Sara Carbonero, and Malcolm Muggeridge. After her are Kenji Goto, Sue Gardner, Daniel Schneidermann, Daphne Caruana Galizia, Piers Morgan, and Peter Jennings.