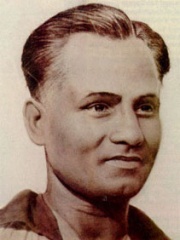 Major Dhyan Chand (29 August 1905 – 3 December 1979) was an Indian field hockey player, widely regarded as one of the greatest field hockey players in history. He was known for his extraordinary ball control and goal-scoring feats, in addition to earning three Olympic gold medals, in 1928, 1932 and 1936, during an era where India dominated field hockey. His influence extended beyond these victories, as India won the field hockey event in seven out of eight Olympics from 1928 to 1964.Known as The Wizard or The Magician of hockey for his superb ball control, Chand played internationally from 1926 to 1949, where he scored 570 goals in 185 matches according to his autobiography, Goal, and over 1000 goals in his entire domestic and international career. Read more on Wikipedia

Among politicians, Dhyan Chand ranks 4,998 out of 15,577. Before him are Danilo I, Prince of Montenegro, Philip I of Macedon, Jizi, Pridi Banomyong, Eupraxia of Kiev, and Saionji Kinmochi. After him are Prince Adalbert of Prussia, Prince Henry, Duke of Gloucester, Amadeus II, Count of Savoy, Yoshirō Mori, Mohamed Boudiaf, and Rashid bin Saeed Al Maktoum.