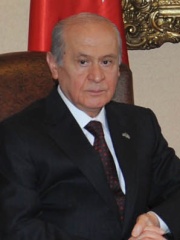 Devlet Bahçeli (born 1 January 1948) is a Turkish politician who has been the chairman of the Nationalist Movement Party (MHP) since 6 July 1997.An academic in economics at Gazi University in Ankara until 1987, he served as Deputy Prime Minister in the coalition government of Bülent Ecevit (1999–2002). Read more on Wikipedia

Since 2007, the English Wikipedia page of Devlet Bahçeli has received more than 198,542 page views. Her biography is available in 20 different languages on Wikipedia making her the 7,672nd most popular politician.