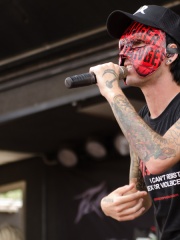 Aron Erlichman (born March 2, 1983), better known by his stage name Deuce, is an American rapper, music producer and guitarist. Brought to fame as a producer, singer-songwriter and one of the founding members of rap rock band Hollywood Undead, Deuce departed from Hollywood Undead in 2010 and has since moved on to solo work through the label "Five Seven Music", a branch of Eleven Seven Music. He was formerly involved in a movement with fellow rapper Truth (Vardan Aslanyan) called "Nine Lives" (often stylized as both "9LIVES" and "IX LIVES"). Read more on Wikipedia

Page views of Deuces by language

Among singers, Deuce ranks 2,882 out of 3,541. Before him are Hitomi Yoshizawa, Yohio, Miwa, Daniel Kajmakoski, Chesney Hawkes, and Artiwara Kongmalai. After him are Levina, Olivia, Sean Price, Kris Allen, Donna Lewis, and Stella Mwangi.