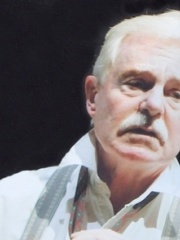 Sir Derek George Jacobi (; born 22 October 1938) is an English actor and stage director. A "forceful, commanding stage presence", Jacobi has enjoyed a successful and distinguished stage career, appearing in various stage productions of William Shakespeare such as Hamlet, Much Ado About Nothing, Macbeth, Twelfth Night, The Tempest, King Lear, and Romeo and Juliet. He is also known for his performances in Anton Chekov's Uncle Vanya and Edmond Rostand's Cyrano de Bergerac. Read more on Wikipedia

Derek Jacobi is most famous for his portrayal of the title character in the 1976 BBC TV series I, Claudius.