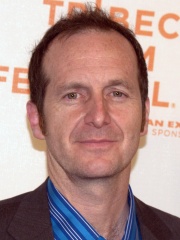 Denis Patrick Seamus O'Hare (born January 16, 1962) is an American actor, singer, and author noted for his award-winning performances in the plays Take Me Out and Sweet Charity, as well as portraying vampire king Russell Edgington on HBO's fantasy series True Blood. He is also known for his supporting roles in such films as Charlie Wilson's War, Milk, Changeling, and Dallas Buyers Club. In 2011, he starred as Larry Harvey in the first season of the FX anthology series American Horror Story, for which he was nominated for a Primetime Emmy Award for Outstanding Supporting Actor in a Miniseries or a Movie in 2012. Read more on Wikipedia