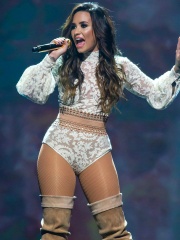 Demetria Devonne Lovato ( lə-VAH-toh; born August 20, 1992) is an American singer, songwriter, and actor. After appearing on the children's television series Barney & Friends (2002–2004), Lovato rose to prominence for playing Mitchie Torres in the musical television film Camp Rock (2008) and its sequel Camp Rock 2: The Final Jam (2010); the former film's soundtrack contained "This Is Me", Lovato's debut single and duet with Joe Jonas, which peaked at number nine on the Billboard Hot 100. After signing with Hollywood Records, Lovato released their pop rock debut album, Don't Forget (2008), which debuted at number two on the Billboard 200. Read more on Wikipedia