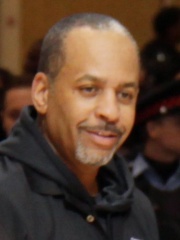 Wardell Stephen "Dell" Curry (born June 25, 1964) is an American former professional basketball player. He played in the National Basketball Association (NBA) from 1986 until 2002 and retired as the Charlotte Hornets' all-time leader in points (9,839) and three-point field goals made (929).Curry currently works as a color commentator, alongside Eric Collins and Stephanie Ready, on Charlotte Hornets television broadcasts. Read more on Wikipedia

Since 2007, the English Wikipedia page of Dell Curry has received more than 5,325,952 page views. His biography is available in 20 different languages on Wikipedia making him the 116th most popular basketball player.