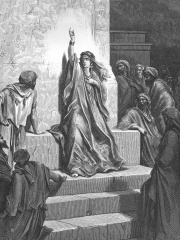 According to the Book of Judges, Deborah (Hebrew: דְּבוֹרָה, Dəḇōrā, "bee") was a prophetess of the God of the Israelites, the fourth Judge of pre-monarchic Israel and the only female judge mentioned in the Bible. Many scholars contend that the phrase, "a woman of Lappidot", as translated from biblical Hebrew in Judges 4:4 denotes her marital status as the wife of Lappidot. Read more on Wikipedia

Deborah was a prophetess who led the Israelites in battle against the Canaanites. She is most famous for her victory over the Canaanites in the battle of Kishon.

Page views of Deborahs by language