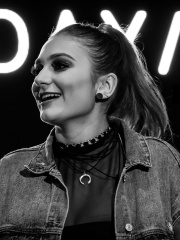 Grace Martine Tandon (born October 24, 1998), better known by her stage name Daya (stylized DΛYΛ; pronounced ), is an American singer and songwriter from Mt. Lebanon, Pennsylvania. She is signed to Sandlot Records and AWAL, and released her self-titled debut extended play (EP), Daya, on September 4, 2015, which includes the song "Hide Away", which has peaked at number 23 on the Billboard Hot 100. Read more on Wikipedia

Page views of Dayas by language

Among singers, Daya ranks 3,667 out of 3,528. Before her are Amos Lee, Uffie, Jessica Mauboy, Nina Sublatti, Joe Budden, and Kimberley Walsh. After her are Gabrielle Aplin, Stevan Faddy, Bun B, Kid Ink, Foxes, and Bizzy Bone.