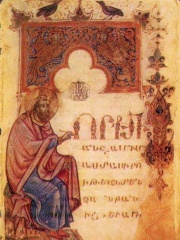 David the Invincible (or David the Philosopher) was a neoplatonist philosopher of the 6th century.David was a pupil of Olympiodorus in Alexandria. His works, originally written in Greek, survive in medieval Armenian translation, and he was given the byname of "invincible" (Classical Armenian: Անյաղթ; reformed: Անհաղթ, Anhağt) in the Armenian tradition, which considers David himself an Armenian. Due to confusion with other authors called David and due to an abundant body of medieval legend, almost nothing is known with certainty about the historical David. Read more on Wikipedia

Page views of David the Invincibles by language

Among philosophers, David the Invincible ranks 787 out of 1,089. Before him are Zacharias Rhetor, Robert Anton Wilson, Karl Vogt, Jean Starobinski, Maximus of Ephesus, and Motoori Norinaga. After him are Samuel Clarke, André Glucksmann, Ferenc Dávid, Francesco Algarotti, Melchor Cano, and Lanza del Vasto.