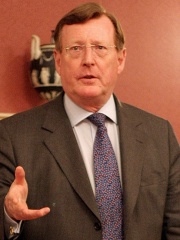 William David Trimble, Baron Trimble, (15 October 1944 – 25 July 2022) was a British politician who was the first First Minister of Northern Ireland from 1998 to 2002, and leader of the Ulster Unionist Party (UUP) from 1995 to 2005. He was also Member of Parliament (MP) for Upper Bann from 1990 to 2005 and Member of the Legislative Assembly (MLA) for Upper Bann from 1998 to 2007. Trimble began his career teaching law at The Queen's University of Belfast in the 1970s, during which time he began to get involved with the paramilitary-linked Vanguard Progressive Unionist Party (VPUP). Read more on Wikipedia