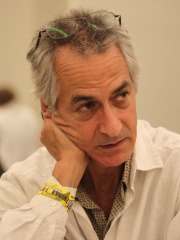 David Russell Strathairn (; born January 26, 1949) is an American actor. He is the recipient of several accolades, including an Independent Spirit Award, a Primetime Emmy Award, and a Volpi Cup, and has been nominated for an Academy Award, a BAFTA Award, a Critics' Choice Award, two Golden Globe Awards, and four SAG Awards. Strathairn came to prominence in the 1980s and the 1990s performing in the films of fellow Williams College graduate John Sayles, including Return of the Secaucus 7 (his screen debut), The Brother from Another Planet, Matewan, City of Hope, Eight Men Out, and Limbo. Strathairn was nominated for an Academy Award for Best Actor for portraying journalist Edward R. Read more on Wikipedia