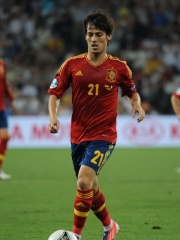 David Josué Jiménez Silva (Spanish pronunciation: [daˈβið ˈsilβa]; born 8 January 1986) is a Spanish professional footballer who plays for La Liga club Real Sociedad. Silva plays mainly as a central or an attacking midfielder but can also play as a winger or second striker. He is predominantly a left-footed player and his passing ability and possession-retaining qualities have earned him the nicknames "Merlin" and "El Mago" from his teammates and fans. Read more on Wikipedia

Since 2007, the English Wikipedia page of David Silva has received more than 4,430,962 page views. His biography is available in 66 different languages on Wikipedia making him the 871st most popular soccer player.