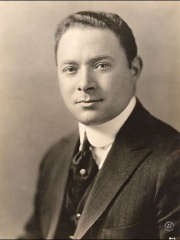 David Sarnoff (February 27, 1891 – December 12, 1971) was a Russian-American businessman and pioneer of American radio and television. Throughout most of his career he led the Radio Corporation of America (RCA) in various capacities from shortly after its founding in 1919 until his retirement in 1970. He ruled over an ever-growing telecommunications and media empire that included both RCA and NBC, and became one of the largest companies in the world. Read more on Wikipedia

Since 2007, the English Wikipedia page of David Sarnoff has received more than 447,208 page views. His biography is available in 23 different languages on Wikipedia making him the 243rd most popular businessperson.