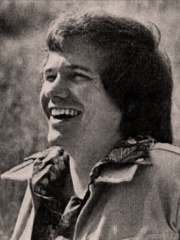 David Ashworth Gates (born December 11, 1940) is an American singer-songwriter, guitarist, musician and producer, frontman and co-lead singer (with Jimmy Griffin) of the group Bread, which reached the tops of the musical charts in Europe and North America on several occasions in the 1970s. Read more on Wikipedia

Since 2007, the English Wikipedia page of David Gates has received more than 1,078,515 page views. Her biography is available in 16 different languages on Wikipedia making her the 1,361st most popular musician.